Vietnam is constantly metamorphosing along with the seasons, changing its landscapes and atmosphere. From the cheerful winter festivities to the golden sceneries in the summer, every visitors fall under the charm of Northern Vietnam’s beauty and its culture, no matter the period. But you might completely fall in love with it if you travel there in the right time, depending on your interests. What is the best time to visit Vietnam? Is it worth it to travel during the Monsoon? Here is an overview of Northern Vietnam’s highlights through the seasons.

Winter: a cold but cheerful Vietnam 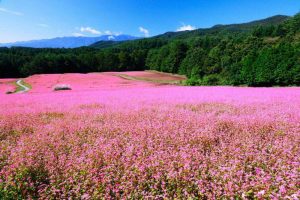 At first glance, you might think that Northern Vietnam isn’t worth visiting during winter. Indeed, the weather gets pretty cold in the mountains, and especially in Sapa where you can even experience snowfalls. However, the sceneries becomes quite unique during this period of the year. In Sapa, the fog and snow covering the peaks create a mystical atmosphere to the valleys, while in Ha Giang, the freshly bloomed buckwheat flowers line the hills in pink. As for Halong, the waters are calmer and quieter, offering perfect conditions for cruising.

Moreover, winter is a perfect time to visit big cities such as Hanoi, where the weather feels warmer. In December, monuments such as Saint Joseph’s Cathedral are illuminated for Christmas, giving an enchanted atmosphere to the city. The latter gets even more cheerful in early February as the Tet festival comes. Indeed, the Lunar New Year is the biggest celebration of Vietnam, during which the lively streets are filled with flowers, lights and great performances for a few days. 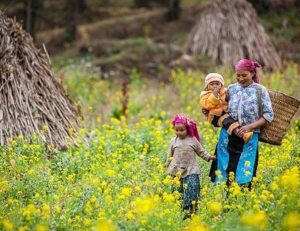 Starting from march, the days slowly begin getting warmer as spring approaches. The whole region brightens as the sky gets clearer and the flowers bloom, transforming the mountains into colorful carpets. March to May might be the best time to travel around Vietnam and enjoy the beautiful sceneries before the touristic period. The conditions are ideal for trekking in Sapa, Ha Giang or Ninh Binh, or to sail between the limestone karsts of Halong Bay.

If you are visiting Ha Giang in April, you shouldn’t miss Khau Vai Love market. This traditional ethnic market only happens once a year, during which women and men can meet their former lover for a day. This is usually a very busy event, so don’t think about spending a night there without planning it well beforehand! Summer is without any surprise the most touristic season in Vietnam, as well as the most expensive. But it is also the most humid and hottest period of the year. If you plan to travel from May to July, don’t forget to bring your raincoat and mosquito repellent! The rain season might be a bit inconvenient, but most likely brings charm to the North’s sceneries. The downpours cause “waterfalls” as the water pours from Ha Giang’s and Sapa’s rice terraces, and the Ban Gioc waterfall in Cao Bang gets even more spectacular. Some floods can also appear in some regions as well as in Hanoi, so check the weather before heading anywhere.

The weather gets a bit drier during August, which is marked by The Wandering Souls day : this spiritual holiday celebrates the opening of the spirits’ world to the humans’ world. The end of summer leads to the harvest season, during which the heat makes way to cooler temperature, and the rice paddies overlay beautiful golden colors. During September and October, the conditions are perfect to enjoy a peaceful trek across Sapa’s, Ha Giang’s and Ninh Binh’s golden rice fields. From November, the pink buckwheat flowers planted by the ethnic minorities will start to show up and transform the lands into picturesque paintings. Similarly to late Spring, Autumn would be a great time to visit Northern Vietnam, as the busy season comes to an end and the views get more and more magical.

Mid-Autumn festival is the main event during this period of the year. Celebrating the end of the harvest, the cities become very colorful and cheerful, as the lanterns light up the streets. You can experience the jovial atmosphere by eating mooncakes while watching lion dances.

To conclude, the best time to visit Northern Vietnam depends on your interests and preferences. If you want to relax on a boat in Halong bay’s waters, the hot weather of summer shouldn’t be a problem. For trekkers enthusiasts, late Spring or Autumn would be the greatest choices. And if you are drawn to cities, the dry winter and its celebrations will be perfect to enjoy Hanoi to its fullest! 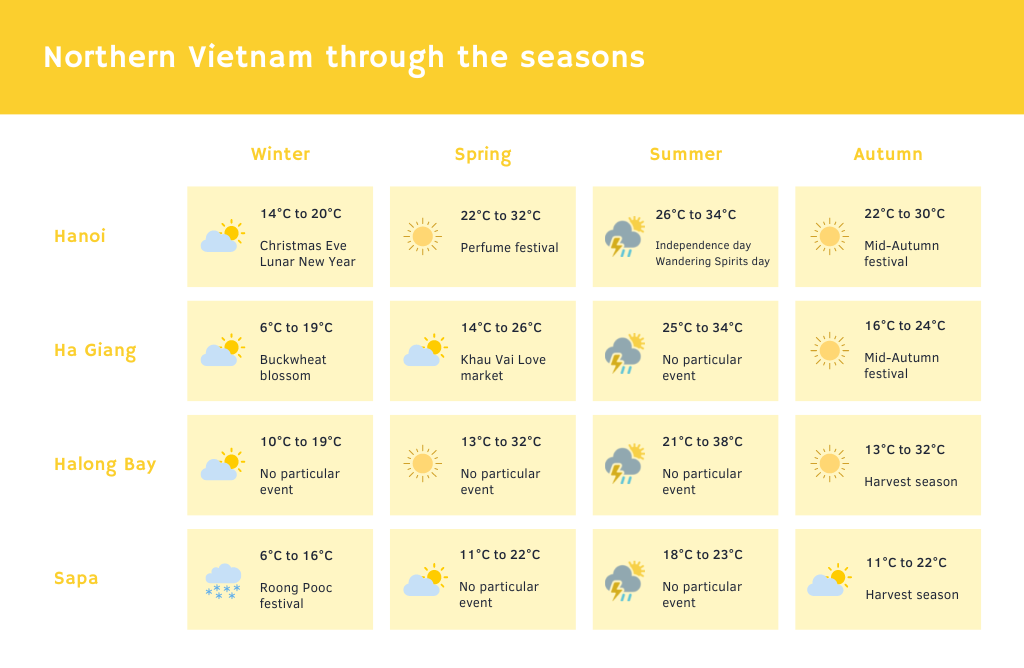 Still don’t know when to visit? We will make sure that you don’t miss any special moments of the authentic Northern Vietnam. Get in touch with us to book a tour! 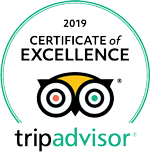